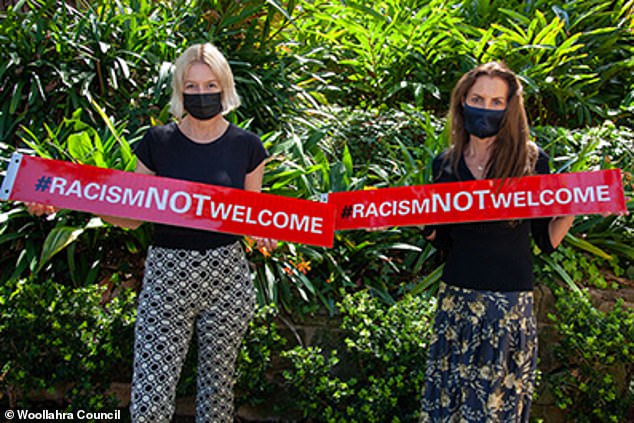 Outrage sparked by revival of ‘anti-racist’ STREET SIGNS erected in some of Australia’s wealthiest suburbs – as offended residents shout: ‘We are NOT racist’

Anti-racism street signs erected in some of Australia’s wealthiest suburbs have come under fire after the campaign failed.

But the move by Woollahra council as part of a town-wide campaign has sparked a bitter backlash, with one councilor calling it ‘wake-up-ism gone mad’.

Anti-racism road signs in some of Australia’s wealthiest suburbs have come under fire after the campaign failed and residents said they were branded racists (pictured by Mayor Susan Wynne, right, with the Resident Advisor First Luise Elsing, left)

Some local residents have complained that the signs themselves inadvertently give the impression that the suburbs are racist.

Now local Liberal politicians are demanding the signs be taken down.

A motion before council adds: ‘Residents say the signs give a false impression that the people of Woollahra are racist, when no evidence has been presented to that effect.

“The signs do not properly represent our community and are simply an appropriation from another community or local government area, where racism may occur.”

Residents say the campaign makes it look like there is a problem with racism in the quiet residential streets where the signs have been placed and will not solve anything.

The motion says the signs “are not justified by reports of racist incidents, slurs or violence of any kind”.

Woollahra councilor Mary-Lou Jarvis told Radio 2GB on Tuesday: ‘Scolding people with road signs is not going to be enough.

“I was overwhelmed by people in the neighborhood when the signs were posted. There was an incredible diversity among the people who contacted me.

“There was a Jewish woman whose family had come to Australia to escape racism who said she had never experienced racism and ‘What are these signs doing? Please remove them. “

‘She was the first to say to me, “It’s awakening gone crazy.”

“It’s about us taking personal responsibility.”

Councilor Jarvis said the area around Woollahra had more consulates than almost anywhere else, with a wide and diverse range of people in the community.

“We live a stone’s throw from the Chinese, the Hungarians, the Jews…”, she added.

Other councilors called the signs “empty virtue signage”, while Mayor Susan Wynne said they should be moved from residential streets to busier main streets.

Former Socceroo Craig Foster is one of the key campaigners behind the campaign launched last year and aims to “acknowledge the existence of racism, validate people’s lived experiences with racism and normalize conversations about racism while triggering change”.

“A minority that grapples with the word ‘racism’ is as old as Australia itself,” he told the Sydney Morning Herald.

“It is a disappointment to our entire community when an LGA demonstrates an unwillingness to engage in a more truthful conversation.”

Greens councilor Nicola Grieve insisted Woollahra was racist and said she was “flabbergasted” by the opposition to the signs.

She added: “I think it’s completely obscene and absurd.” There is clearly racism in this electorate: I have heard it.

“These signs send the message that we stand up for people of color and do not condone racism.”

Announcement of a new list of financial instruments – SENS