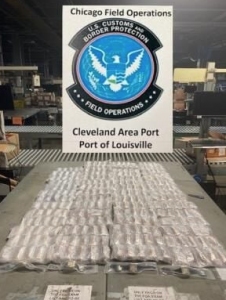 US Customs Seize Counterfeit Brand Watches at Port of Louisville Worth $22.5 Million

More than 90% of all counterfeit seizures made by US Customs and Border Protection (CBP) occur in international mail and express shipping environments. Last week, CBP officers in Louisville seized a package containing counterfeit brand name watches that, if real, would have had a manufacturer’s retail price (MSRP) of more than $22.5 million.

The 584 counterfeit watches bore two brand logos: Rolex and Cartier. The shipment was from an individual in Hong Kong and was destined for a resident of Jamaica, New York. If these watches had been real, the MSRP would have been $22.59 million.

E-commerce sales have contributed to the import of large volumes of small, low-value packages into the United States. Over the past four fiscal years, seized counterfeit watches have been worth the most according to their MSRP – last year, that total was $1.18 billion. Consumers should ensure that they buy online from reputable sources. To learn more about CBP’s e-commerce strategy, visit the CBP e-commerce website.

“Consumers are always looking for the best deal, the unfortunate thing is that criminals are also pedaling their counterfeit products online,” said Louisville Port Manager Thomas Mahn. “Our CBP officers will continue to seize counterfeit items that threaten consumer health and safety and weaken the U.S. economy.”

This seizure was just one of many seizures that occurred that night. Another package contained six counterfeit Richard Millie watches that would have been worth $755,000 if they had been genuine.

Sold in underground outlets and on third-party e-commerce websites, counterfeit products fund smugglers and organized crime members. Consumers often believe they are buying a genuine product, but quickly realize the item is substandard and potentially dangerous.

The trade in counterfeit and pirated goods threatens American innovation, the competitiveness of our businesses, the livelihoods of American workers, and in some cases the health and safety of consumers and the national security of the United States. CBP is at the forefront of intellectual property rights (IPR) enforcement, partnering with industry, other federal agencies, and foreign governments to combat the cross-border trade of harmful and dangerous illicit goods.

When rights holders register their federally registered trademarks and copyrights with CBP, the agency can enforce those rights to protect them at the border. As of September 30, 2021, CBP enforced 20,758 active registered copyrights and trademarks. In fiscal year 2021, CBP seized more than 27,000 shipments with IPR violations. If the seized products were genuine, the total MSRP of the items would have been valued at over $3.3 billion. This represents a 152% increase from FY20, when goods worth MSRP $1.31 billion were seized for IPR infringement. A return to pre-pandemic trade levels and an overall increase in the number of counterfeit product seizures by CBP account for the significant increase in MSRP.

CBP conducts operations at ports of entry across the United States and routinely screens arriving international passengers and cargo for narcotics, weapons, and other restricted or prohibited items. CBP strives to be the premier law enforcement agency improving the nation’s safety, security, and prosperity through collaboration, innovation, and integration.