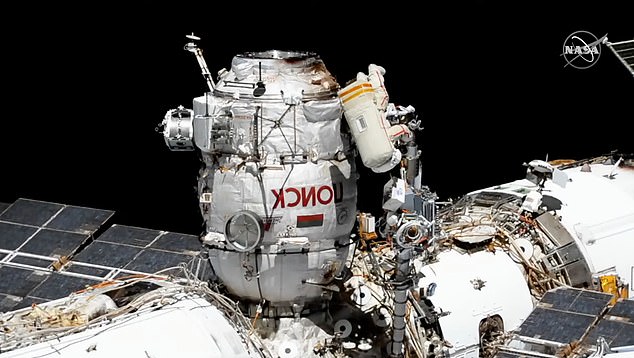 By Ryan Morrison for Mailonline

Two cosmonauts are carrying out the first spacewalk of the year today, as they prepare the ISS’ last Russian docking port to receive its first spacecraft in March.

The Prichal module was launched and attached to the space station in November last year, but required additional work to make it ready for first use.

This is the first spacewalk of the year, where the crew exits from the safety of the station, and is expected to take around seven hours.

The last spacewalk of 2021 was performed by Chinese astronauts Ye Guangfu and Zhai Zhgang, exiting the Tianhe airlock on December 26.

During this new spacewalk, the duo will equip the new Russian modules while wearing the Orlan spacesuits – exiting the airlock of the Poisk module.

The Prichal module will serve as a port, allowing the crewed Russian Soyuz spacecraft to dock and bring passengers aboard the station.

The first time it will be used is in March, when three new cosmonauts arrive.

Prichal is connected to the Nauka module, which arrived on the ISS in July and serves as a new, modern laboratory for low-gravity experiments.

These new investments hint that Russia plans to expand its investments in the ISS beyond 2030, following a similar move by NASA.

It is Shkaplerov’s third spacewalk and Dubrov’s fourth, according to NASA.

During the spacewalk, three NASA astronauts will continue to load the SpaceX Cargo Dragon spacecraft ahead of its undocking on Friday.

Flight engineers Mark Vande Hei and Raja Chari began loading after lunchtime, before NASA astronaut Thomas Marshburn joined them late in the day to help organize and secure the cargo.

It will be the first spacewalk of the year, where the crew emerges from the safety of the station, and is expected to take around seven hours to complete

Marshburn, along with ESA astronaut Matthias Maurer, also took part in a training session on the exercise bike located in the American laboratory module Destiny.

The team is also preparing a tour of the first fully private mission – Axiom Mission 1 – to visit the space station on March 31.

Once aboard the orbiting lab, Axiom Space’s four-person crew will conduct science, outreach, and business activities for eight days.

EXPLAINED: THE $100 BILLION INTERNATIONAL SPACE STATION IS 250 MILES ABOVE EARTH

The International Space Station (ISS) is a $100bn (£80bn) science and engineering laboratory that orbits 400km above Earth.

It has been permanently occupied by rotating crews of astronauts and cosmonauts since November 2000.

The crews came mainly from the United States and Russia, but the Japanese space agency JAXA and the European space agency ESA also sent astronauts.

Research conducted aboard the ISS often requires one or more of the unusual conditions found in low Earth orbit, such as low gravity or oxygen.

The US space agency NASA spends around $3bn (£2.4bn) a year on the space station programme, with the rest of the funding coming from international partners including Europe, Russia and Japan.

So far, 244 people from 19 countries have visited the station, including eight individuals who have spent up to $50 million on their visit.

There is ongoing debate about the station’s future beyond 2025, when it is believed that part of the original structure will reach “end of life”.

Russia, a major partner of the station, plans to launch its own orbital platform around this date, with Axiom Space, a private company, planning to send in parallel to the station its own modules for purely commercial use.

NASA, ESA, JAXA and the Canadian Space Agency (CSA) are working together to build a space station in orbit around the Moon, and Russia and China are working on a similar project, which would also include a base in area.

Truist eliminates most of its overdraft fees