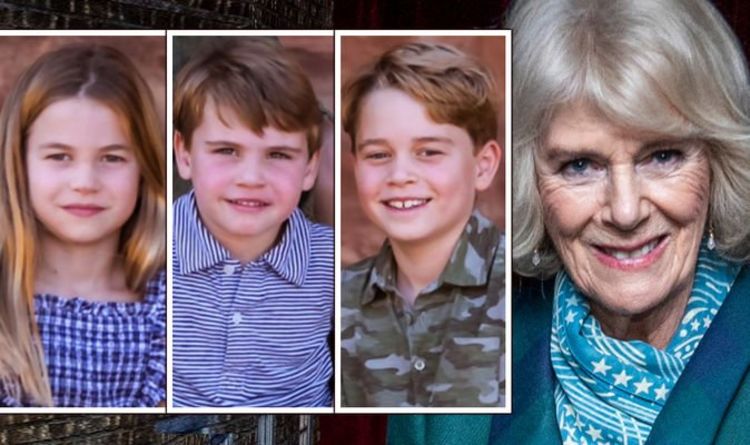 Like any family, members of the royal family like to give each other endearing nicknames. From abbreviated versions of nicknames to terms of endearment and less than traditional nicknames when royals are in the privacy of their own home, surrounded by loved ones, they don’t call each other by their more formal royal titles .

It has been revealed that Prince William’s children, the youngest generation of royals, also use cute names for their elders.

In a card shared on Instagram by Kensington Palace to mark Mother’s Day last year, Princess Charlotte’s adorable handwriting could be seen addressed to her late grandmother, ‘Granny Diana’.

However, when it comes to Charles’ wife, Camilla, Duchess of Cornwall, the Cambridge children don’t call her by the traditional “grandmother” or “nanny.”

Camilla, who herself has five grandchildren, as well as the Cambridge and Archie and Lili children of Prince Harry and Meghan Markle, is instead referred to as “Gaga.”

The unusual nickname was revealed by the Duchess herself when she met Lady Gaga at the 2016 Royal Variety Performance.

Shortly after Prince George’s birth, the Duchess also told the Daily Mail: “My own grandchildren call me GaGa.

“I don’t know if it’s because they think I am! It’s funny but it’s still very sweet.”

It seems the Cambridge children are following in their father’s footsteps when it comes to unusual nicknames for their grandparents, as Prince William used to call the Queen “Gary” when he was younger because he didn’t couldn’t say the word “grandma”.

He too has a special nickname from his children, as Charlotte’s Mother’s Day card revealed the term she uses for her father, the Duke of Cambridge, was also touched upon.

The message read: “Dear Grandma Diana, thinking of you on Mother’s Day. Love you very much, Dad misses you. Lots of love, Charlotte.”

Charlotte and her siblings Prince George and Prince Louis would also refer to the Prince of Wales as “Grandfather of Wales”.

The nickname Grandpa Wales follows the same format used by the Queen for her grandfather George V, whom she called Grandad England.

Meanwhile, Prince George also reportedly has an adorable nickname for his great-grandmother, the Queen, and calls her “Gan-Gan.”

The monarch’s nickname was revealed by the Duchess of Cambridge in 2016 after the birth of Princess Charlotte.

“The Queen was really delighted it was a little girl, and I think as soon as we came back here to Kensington she was one of our first visitors here.

“George is only two and a half years old and he calls him ‘Gan-Gan’.

“She always leaves a little gift or something in their room when we go and stay and it just shows her love for her family.”

Young George is also said to have a nickname for his father – who he calls ‘Pops’, which Kate revealed when visiting Leicester in November 2018.

One of the best-known royal nicknames is, of course, that Queen Elizabeth II is known to members of her immediate family as Lilibet.

The Queen’s nickname was adopted by Prince Philip for his wife throughout her life, and grandson Prince Harry also chose to use the sweet nickname for his daughter.

What’s more, Mike and Zara Tindall have been married for a decade, and last year when he recorded an episode of the House of Rugby podcast from home, Mike revealed he calls his wife ‘Zed’.

Also in a birthday wish to Beatrice on Instagram, Princess Eugenie revealed the sweet nickname she uses for her sister – Beabea.