Who wouldn’t want to see The Crown’s Alex Jennings play a small-town vicar?

With his kind, patrician face, he looks heaven-sent for the role of Reverend David Highland.

Yet in Stephen Beresford’s fun and ultimately sad new play, we’re also meant to imagine his Devonshire pastor as a troubled drinker and sexual womanizer.

Her even bigger problem, however, is the mother of a dead child who wants Disney balloons at her daughter’s funeral. She yearns to celebrate her daughter’s short life; he feels that death must be looked directly in the eye.

Either way, I couldn’t believe such a benign old stick would choose to take Custer’s last fight over an issue like this. Inevitably, his tough line turns the community against him – but that also struck me as too far removed from his character to be believable. 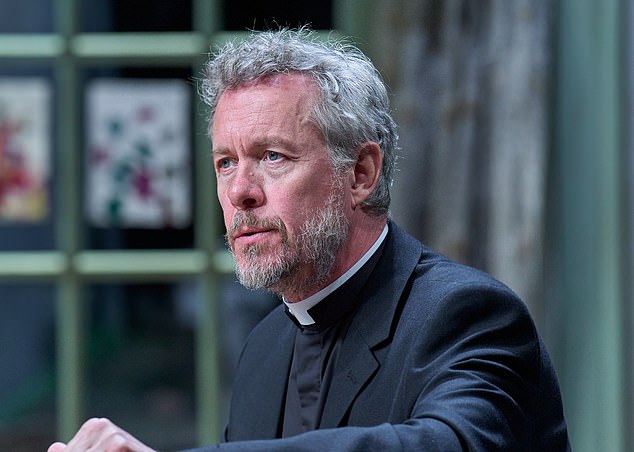 Who wouldn’t want to see The Crown’s Alex Jennings play a small-town vicar? With his kind, patrician face, he looks heaven-sent for the role of Reverend David Highland

Beresford has been highly regarded since directing his Chekhovian drama The Last Of The Haussmans at the National Theater in 2012.

Had he revealed a bigger personal dilemma behind Highland’s decision, or offered a deeper examination of the unfortunate vicar’s conscience, it might have worked.

Instead, his Alan Bennettish dialogue lets David off the hook, with tons of irony and very English witticisms that defuse the tension (Bennett, on the other hand, has always been wary of material so overtly emotional).

Jennings associates spiritual unease with flashes of angst, though too often he reaches for a cheap scotch or a tongue-in-cheek remark. In particular, he deplores his failure to respect the first rule of ecclesiastical law: “Don’t annoy the herd”.

Phoebe Nicholls has the patience of a saint as a wife, somehow holding the house together; while Jo Herbert, as his sexually frustrated teacher daughter, dutifully takes over her parochial responsibilities.

It’s up to David’s adopted daughter (Racheal Ofori) – a militant black atheist – to be more facetious, though sometimes (like her gag about how she has the dress sense of a Lithuanian prostitute) she rings like an author’s voice.

Jack Greenlees, as a gay priest and pin-up, ticks the remaining boxes of church and sexual politics. The locals are primarily portrayed by Josh Finan, as the dead child’s jolly thick brother.

Amusingly, he has a habit of asking deep, existential questions; yet he is also given to wicked troubles, for which he is never held accountable.

Thanks to one of his second-half pranks, Beresford’s plot moves away from what should be the titular child’s powerful story. Indeed, Sarah Twomey as the mother of this child, who should be the moral and emotional conscience of the play, is reduced to an awkwardly poignant side-show.

Despite these flaws, there’s a lot to like about this vision of a rural community, with its annual festival blessing the city’s river for safety and fruitfulness (echoes of Jez Butterworth’s Jerusalem).

Sir Nicholas Hytner’s airy production skims over the underlying pain. And Mark Thompson’s ensemble of a flagstone presbytery kitchen with a Norman church towering beyond is a great comfort to the eyes.

But with fewer gags and a less facetious tone, it could have been a better piece: capturing the very real pain of a Church and a country that – as Beresford spotted – is in the throes of extremely uncomfortable change. .

From July 1, after touring Chichester, The Southbury Child will move to the Bridge Theater in London SE1.

This is a celebration of girl power over the centuries – in neon color. It’s a Six for six-year-olds, a history lesson and a call to arms: don’t be afraid to do what’s right, don’t be fragile like a flower but fragile like a bomb.

Talented playwright/lyricist Chris Bush places a young girl at the center of Kate Pankhurst’s picture book. Jade is left behind on a school trip, alone in a museum that hosts heroines of air, land and sea. to develop her senses and sensitivity by Jane Austen, and thrown into the deep end by Olympic swimmer Gertrude Ederle.

Emmeline Pankhurst — a distant relative of the author — reminds him that with half as many women as men in Parliament, the job is not done.

I’m still singing thanks to Miranda Cooper who gives the show the poptastic sound of her hits for the Sugababes and Girls Aloud.

But all is not optimistic. In a particularly poignant moment, Rosa Parks hugs Jade and Anne Frank, telling them that all she did was refuse to give up her seat on a bus to a white man. Yet it changed the world.

It’s Not Who I Am (Royal Court Theatre, London)

A Doll’s House, Part 2 is one of the most condescending theatrical homilies I have ever had the misfortune to endure. American writer Lucas Hnath has deigned to revisit Henrik Ibsen’s 19th century Norwegian melodrama about a woman who abandons her husband and children, and treat it as an opportunity to pontificate on the institution of marriage.

It begins by asking Ibsen’s revered feminist heroine, Nora (Noma Dumezweni), to return to her husband Torvald (Brian F. O’Byrne) to demand that he sign the divorce he promised 15 years ago. earlier.

But her ultimatum isn’t delivered until she first teaches her bewildered governess (June Watson) how and why marriage destroys women’s lives.

She then turns against her still traumatized husband and explains to him, once again, why he is a hopeless human being and why their marriage was rotten to the core.

Any attempt to cut off his protests is met with a scowl of disbelief. Even his adult daughter (Patricia Allison) is considered a not-yet-fully-formed “mini-me.”

For millennia, the theater has familiarized heroes and heroines with their flaws. Not here. This 95-minute portion of educational self-fortification is at least three times longer, thanks to Nora de Dumezweni. 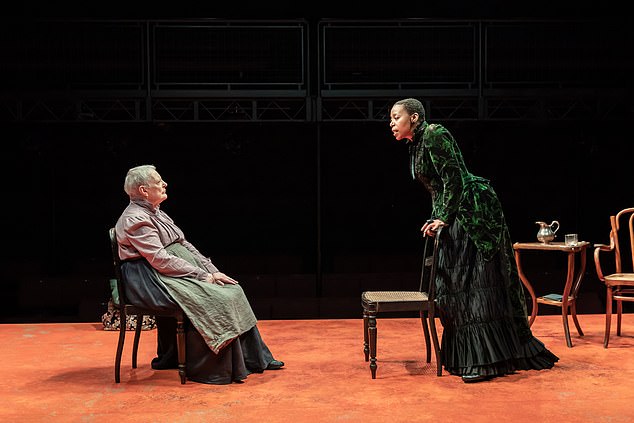 Her ultimatum isn’t delivered until she first lectures her baffled governess (June Watson) on how and why marriage destroys women’s lives.

She is so supremely important that even the prospect of prison or misery does not offend her. She is immune to theatrical pursuits.

Pompously postponing her Byzantine love life, her condescending coup de grace is to reject the divorce she has always demanded on the grounds that she now considers it… condescending!

The condescension, however, is structural in James Macdonald’s production, from the moment the roof covering the stage is solemnly lifted to reveal a set of… a few chairs on a crisp orange floor.

The production also combines Hnath’s tuneless modern profanity with starchy period costumes, so it can be safe to speak of the dark past in the language of four-letter enlightenment.

Personally, I found no interest in any of the potential story outcomes, except for one: going home.

Meanwhile, another upper-class theatrical salon, the Royal Court, came very close to accomplishing the difficult task of disappearing on its own foundations.

The occasion is a hoax of a new play by Lucy Kirkwood, which creates a thrill of danger by impersonating a ‘Dave Davison’ play on online identity theft.

Kirkwood seems to think it would be hilarious to present his fictional docu-drama about a young couple falling into a vacuum of isolation and deep paranoia as a secret investigation.

The piece traces the young couple’s journey from meeting, in a restaurant in 2011, to moving in together and having a baby, before his conspiracy theory posts on YouTube during lockdown led them both to be …murdered.

The whole setup is completely bogus and the most real thing in the series is a scene during lockdown in which the couple wash their groceries.

Jake Davies as a lying young handyman is inscrutably nonchalant, but the show’s greatest asset is the ever-watchable Siena Kelly as a young geriatric nurse. She is a bubbly young actress who, through childbirth, goes from carefree flirty to radicalized neurosis.

Priyanga Burford gets the hollow task of playing the author-narrator who claims this is an important and dangerous investigation.

Unfortunately, the world is full of truly important and dangerous investigations that Kirkwood would have done better to pursue.

After having trapped us in the theater, the director Lucy Morrison takes the wise precaution of not sparing any interval in the two-hour deposition, to thwart the flight of the public.