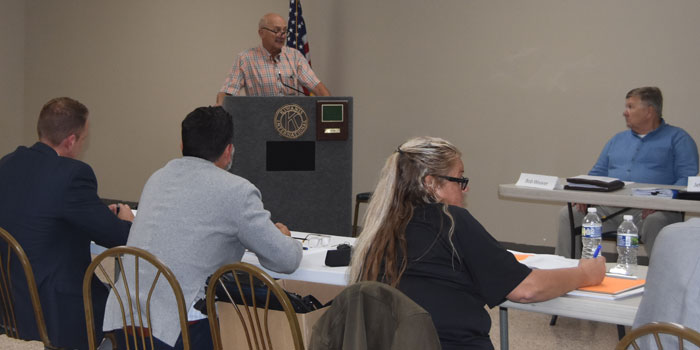 Robert Paton, standing at the podium, wonders if the definitions he submitted in February have been used. Show in front are Jeff Roe, financial adviser, Baker Tilly, Andrew Boxberger, lawyer and Jennifer Ransbottom, Jones Petrie Rafinski. Seated to the right of the podium is Bob Weaver, member of the sewer district council. Photos by Caleigh Byrer.

NORTH WEBSTER — Members of the Regional Sewer District of Tippecanoe & Chapman heard from three of the 11 people who attended the proposed public hearing into the sewer rate ordinance on Monday, September 12. Although there was no objection to the tariff, an objection was made to the definitions which defined the rates.

Jeff Rowe, Baker Tilly Councilmen, Financial Advisor; and Andrew Boxberger, Counsel, provided a detailed presentation on rates and the new order at the start of the hearing.

Boxberger reiterated the rationale for the rates, stating that “in the sewer world, we say all systems are built for the 4th of July because they have to run on the busiest day of the year.”

Additionally, he said there would be no seasonal or metered properties, which would provide benefits for some, but not for others. “Rates would skyrocket,” he said, noting that the flat rates were set so that all owners could share the costs.

Roy Ulch asked if the $200 license fee required at the time of connection and the monthly rate would be applied separately. He also questioned the definition of garage.

Boxberger clarified that houses with garages would only be billed as a 1.25 dwelling unit if the garage was detached and produced sewage. The permit fee of $200 is required at the time of connection.

Robert Paton asked where community members who could not make it to the meeting could send their comments or questions. Boxberger said emails could be sent to him at [email protected] Paton also suggested that the board make changes to their listed definitions so that they are more in line with state and federal regulations. Paton will email those amendments, which were originally tabled in February.

The interim monthly rate during construction will be $66.50 per equivalent dwelling unit, effective December 1. State law requires that the provisional rate charged be used for debt service, operating and administrative costs.

Owners will be the only beneficiaries of the annual passbook billing system. An online payment form should be available in the future.

The council added that anyone who has met the exemptions but has a grinder installed for a future connection will also pay the debt service rate.

The full rate of $95.60 per single EDU can be expected to come into effect approximately two years after construction is complete. The project is expected to take 690 days or less, as there is additional time in the event of weather variation.

Prescription rates will be charged throughout the year based on maximum capacity, ensuring the system is built with the capacity to sustain as much use.

There was no opposition of the rates or any of the financial plan regarding the construction.

Prior to the public hearing, council held its monthly meeting. During the meeting, the official effective date of the interim monthly rate and the allocation of funds were discussed. The board approved sending coupon books to customers in December.

Council will meet at 5:30 p.m. on Monday, September 19 at the North Webster Community Center to take formal action on the rate order.