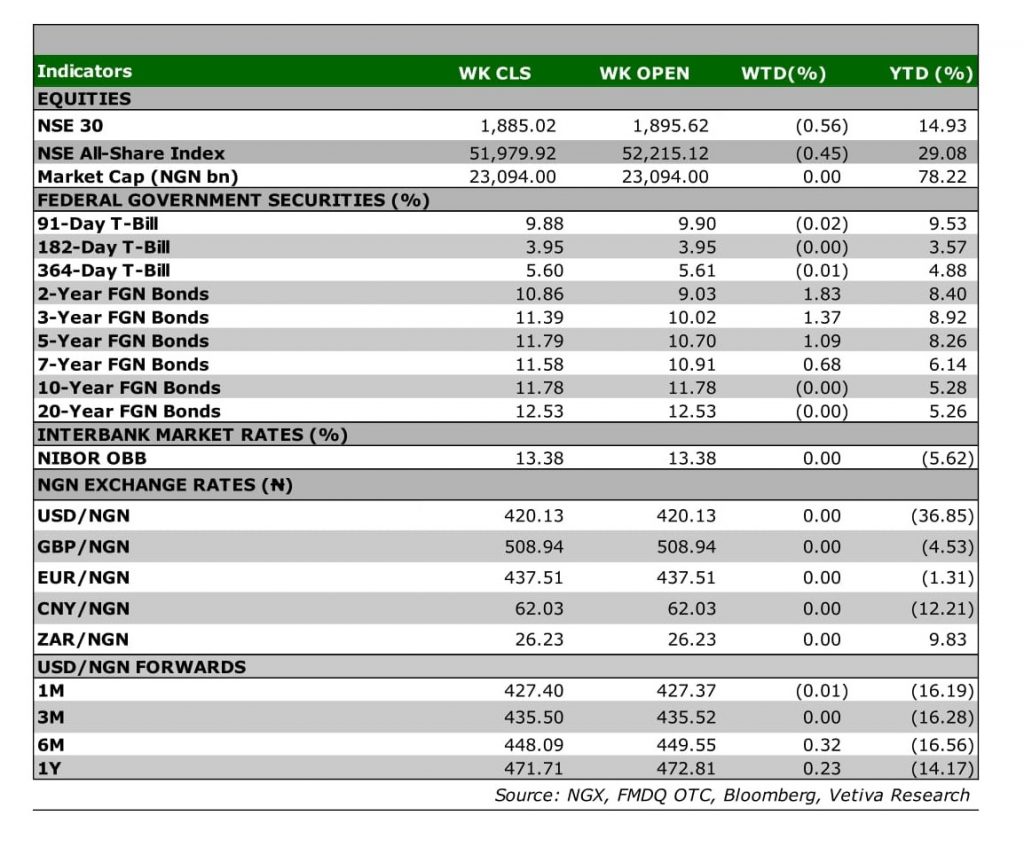 What shaped the last week?

Global: It was another week of buy-side action across the global space as investors reacted to the latest policy decisions from the European Central Bank (ECB) and the US Federal Reserve. As inflation continues to drive up prices around the world, global central bankers have taken an aggressive stance to rein in soaring inflation by strengthening their respective currencies. Starting in the Asia-Pacific region, the Nikkei-225 posted a strong performance w/w up 4.20% as investors reacted favorably to lower am/m inflation. The positive sentiment in the region trickled down to markets in Hong Kong and Mainland China, with the Hang Seng and Shanghai Composite rising 1.53% and 1.30% respectively. In Europe, where the ECB raised rates for the first time in more than a decade, the bank’s 50 basis point rate hike boosted investor confidence in the region; Germany’s Dax climbed 3.38%, with France’s CAC and London’s FTSE-100 rising 3.12% and 1.58% respectively. Finally, in the US, tech stocks have been the best performers this week as earnings season kicks into high gear. NASDAQ was the region’s best performer rising 4.86% w/w as gains in TESLA, NVDA and a host of other counters boosted its performance. Additionally, the S&P 500 and Dow Jones also benefited from improved sentiment in the region, as they gained 3.47% and 2.59% respectively.

Domestical economy: The Monetary Policy Committee (MPC) raised the benchmark rate by 100 basis points to 14%. The decision was based on sustained inflationary pressures. However, with fuel scarcity (a structural problem) being the main driver of inflation, monetary policy tools may be insufficient to control inflation. Going forward, we see room for further rate hikes as inflation may continue to rise.

What will shape the markets over the coming week?

Equity market: Market sentiment was bearish throughout the week, after Tuesday’s MPR rose with 4 consecutive negative closes. While this may create attractive entry points in some counters, we are likely to see tepid trading sessions next week as investors continue to trade cautiously. However, better than expected second quarter results next week could give the market the necessary positive boost.

Fixed Income: Next week, we expect increased activity in the bond market, due to coupon inflows of 30 billion naira from the 10.00% bond FGN-JUL-2030. Meanwhile, the NTB segment is expected to trade on a subdued note due to weak demand as investors continue to stay on the sidelines ahead of Wednesday’s NTB auction.

Currency: We expect the naira to remain broadly stable across the various windows of the currency space as the CBN maintains its interventions in the forex market.

Recently, the Monetary Policy Committee (MPC) voted to increase the Monetary Policy Rate (MPR) by 100 basis points to 14.0%. This is the first time that interest rates will be raised at two successive MPC meetings under Godwin Emefiele. While the decision to raise rates was unanimous, 6 of the 11 members present opted for a 100bps increase.

The world continues to struggle with soaring inflation, made worse by the war in Ukraine and the sanctions against Russia. As advanced economies battle inflation, policymakers are hesitant to plunge the economy into recession (especially after the US recorded a drop in output in Q1’22). The high level of inflation justifies further aggressive monetary policy tightening in developed countries, as the first rate hike by the European Central Bank and the 7 basis point rate hike by the US Fed loom. These hawkish moves could accelerate the pace of capital flow reversals in emerging economies, as investors shift from gold and equities to fixed-income investments to take advantage of the higher-yielding environment. .

On the domestic front, the Committee highlighted the likelihood of moderate output growth, stemming from the ongoing war and high oil prices, Nigeria’s status as a net oil importer and the aggressive normalization of economies. advancements.

The sustained surge in domestic inflation remains a major concern for the Committee. Although the Committee recognized that inflation was driven by both demand-side and supply-side approaches, we note that the current inflationary push is mainly due to the scarcity of PMS, which is beyond the jurisdiction of the apex bank. We note that despite the inflationary surge of 90 basis points in April 22 which spurred the initial rate hike in May, the surge in inflation averaged 89 basis points in the following months (May 22: + 89 bps, Jun 22; +88 bps). This partly reflects the ineffectiveness of monetary policy tools in the face of the current inflationary surge. Subtly acknowledging the low pass-through of the earlier rate hike, the CBN called on the federal government to strike a balance between pricing and the supply of PMS. In our view, this was partly resolved by secretly approving a PMS price adjustment within a range of ₦170/litre to ₦180/litre. Nevertheless, headline inflation could still tend to rise in the short term, as high PMS prices feed through to food prices.

Although the rate hike came earlier than expected, we note that the apex bank’s change in policy focus (in line with its peers in Ghana and South Africa) implies that further rate hikes could be considered if inflation remains on the uptrend

Travel like a pro with Rosetta Stone, expert advice and cheap airfare