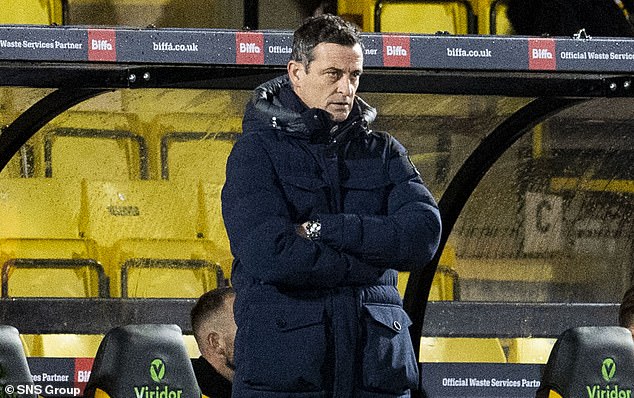 By George Grant For Mailonline and Anthony Brown, Pa

The 1-0 defeat leaves the East Road club seventh after just one win – and seven losses – in nine league appearances.

The 45-year-old admitted that Hibernian fans have every reason to express their fury over Wednesday’s loss.

The beleaguered Easter Road side lost 1-0 thanks to Jack McMillan’s first-half goal on an evening when defensemen Paul McGinn and Paul Hanlon were sent off for a second bookable offense in the final five minutes.

Some of the traveling support demanded Ross’s head at the end, but the former Sunderland manager was philosophical about the tirade that came to him.

He said: â€œIt’s part of the job. I’ve done this for almost 300 games now. Overall, I have had some pretty positive moments as a manager.

â€œYou know that you will be criticized and that criticism grows when you do not produce positive results. We are not doing this at the moment.

â€œThere are times when I would be more defensive if I felt the performance was good because everyone is judging it on the end result. But tonight, all the criticisms I will receive will be justified because I am in charge of this team.

â€œThis level of performance was not good enough, so the criticism should fall on me.

â€œWe weren’t good enough in all aspects of our game. We started the game well until we conceded the goal.

“I know we had an immediate chance to equalize (with a penalty missed by Martin Boyle) but our reaction to losing the goal for the rest of the game is not good enough in all aspects – energy, intensity, quality, discipline.

â€œIt all falls on my shoulders. It belongs to me. It’s my team and the team that was in the park for 60-70 minutes is nowhere near good enough to win Premiership games. ‘