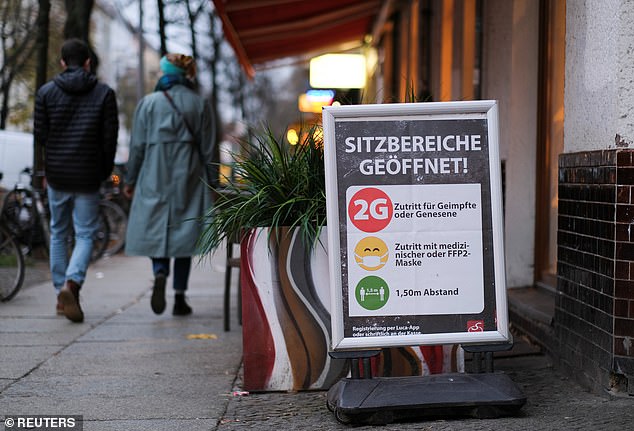 Germany is slow to bite its retirees

By Stephen Adams Medical Editor For The Mail On Sunday

At first glance, UK vaccination rates are comparable to those in countries currently in the throes of a brutal ‘fourth wave’ of Covid.

Figures show that 68 percent of our population has now suffered a double blow compared to 67 percent in Germany and 64 percent in Austria.

But beneath these broadly similar general statistics hides the reassuring fact that many more of our seniors are fully protected against Covid.

A ‘2G’ rule sign, allowing only people vaccinated or recovered from Covid to enter restaurants and other indoor spaces, is displayed at the entrance of a cafe in Berlin, Germany

Only around four percent of UK’s over 60s have not had their second stroke, representing some 650,000 people (pictured, Regent Street, London)

Only around four per cent of the over 60s in the UK have not had their second chance, which represents some 650,000 people.

On the other hand, the vaccination coverage of German and Austrian retirees is much more unequal.

Both countries were chased by slow vaccination campaigns at the start of the year due to the European Union’s reluctance to get the vaccine approved.

They were also slower than the UK in green light recall jabs.