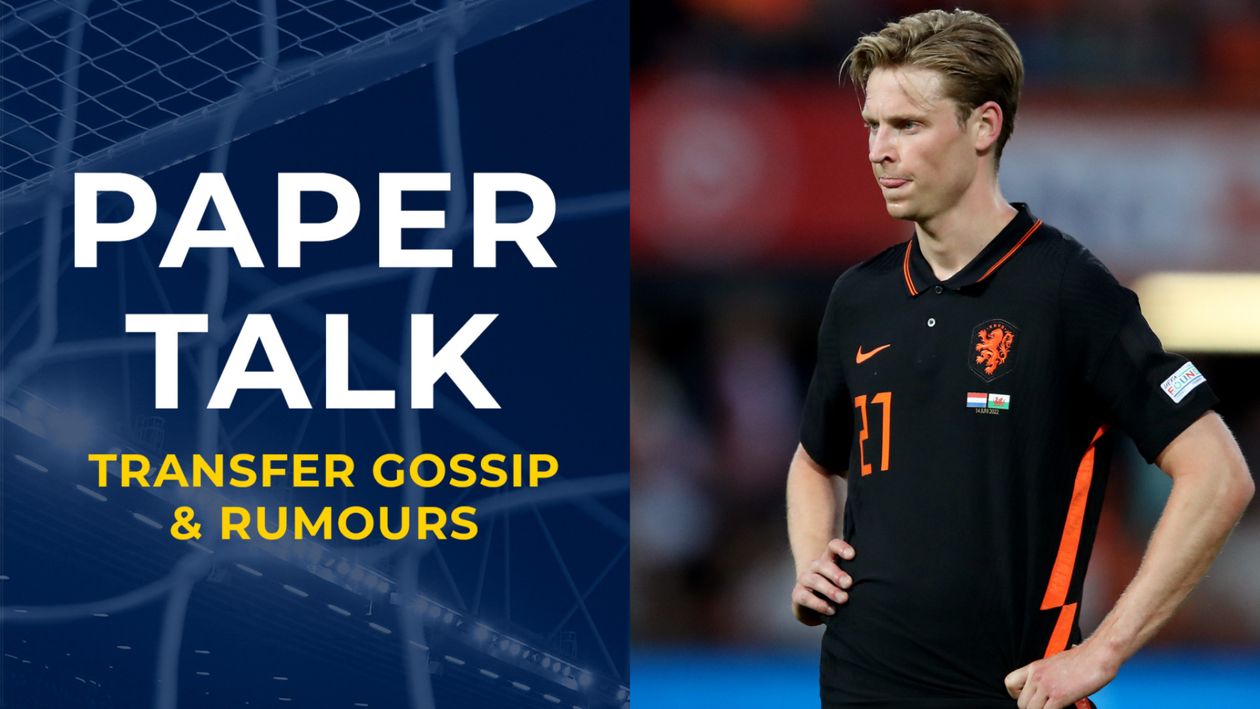 Chelsea are close to signing Frenkie de Jong from Barcelona with the decision now in the midfielder’s hands (Times).

His arrival could spark a loan return to Crystal Palace for Conor Gallagher (Mail).

Marcos Alonso will eventually join Barcelona for £6.5million this week but they could lose Andreas Christensen and Franck Kessie for nothing if they don’t register them before the weekend (Sun, Mail).

Manchester United technical director Darren Fletcher was at the Hawthorns on Monday looking for Ismaila Sarr when the Watford man scored from his own half, but they look set to miss out on Leeds in the hunt for his signature (Mail , Sun).

United bosses will discuss the terms of Adrien Rabiot’s potential transfer to Old Trafford with his mother on Thursday (Sunday).

Meanwhile, PSV will not sell Cody Gakpo to United until the end of Champions League qualifying on August 24, regardless of the offer (Times).

It has emerged that Ralf Rangnick has identified five targets for Manchester United to sign this summer – two have joined City and United have approached none (Sun).

The club have also missed out on Timo Werner this summer according to reports, as he opted to return to RB Leipzig (Express) instead.

Arsenal are closing in on a £33m deal for Villarreal midfielder Yeremy Pino (Mirror) but they need a mass clearance to fund the deal, with Pablo Mari and Alex Runarsson on the point out (Telegraph).

Newcastle have asked ‘big six’ clubs to let them know which players they want to sell as the Magpies look to improve their squad late in the window (Mail).

Lyon midfielder Lucas Paqueta is also an option for Eddie Howe as he would cost just £18million (Express).

Tanguy Ndombele, Giovani Lo Celso, Harry Winks and Sergio Reguilon are among the players who could leave Tottenham either permanently or on loan (Sun).

Tottenham are heading for a new target after Roma boss Jose Mourinho blocked his transfer for Nicolo Zaniolo (Mail, Express)

Willian will soon be a free agent after agreeing to terminate his contract with Corinthians (Mail).

Harvey Elliott is set to sign a new contract with Liverpool until 2026 (Mail).

Manchester City’s Bernardo Silva has admitted his future is uncertain as Barcelona try to sign him (Sun).

Everton are in talks with Stade Rennes over a deal for Guinea international striker Serhou Guirassy but have missed out on Idrissa Gana Gueye. They instead travel for Red Bull Salzburg midfielder Mohamed Camara (Mail, Mirror).

West Ham are close to a deal for Borna Sosa from Stuttgart, but Everton have rejected a loan offer for defender Michael Keane (both Sun).

The Hammer have also increased their offer for PSG defender Thilo Kehrer (Mail).

Nottingham Forest are closing in on Atalanta and Switzerland midfielder Remo Freuler but Lyon have rejected an offer from them for Houssem Aouar (both Mail).

How is the interest rate calculated for Singapore Savings Bonds (SSB) and why is it increasing?