By Christopher Stevens for the Daily Mail

Like a Starsky and Hutch company, Superintendent Roy Grace and his sergeant sat on the beach after solving their latest mystery, drinking beer and playing puns.

They were celebrating the departure of a traitorous colleague, Cassian Pewe from the Met. He lost his taste for South Coast Policing after he nearly plunged off a cliff into a caravan, in Grace (ITV).

“Being here was pushing him over the edge,” chuckled the Super (John Simm). His devoted sidekick, DS Glen Branson (Richie Campbell) laughed until he nearly dropped his bag of chips.

It was Grace and Branson letting their hair down – still buttoned up in the suit, collar and tie. The sergeant even wears a vest.

That’s the biggest problem with Grace, and almost every cop show today. There is no glamour. 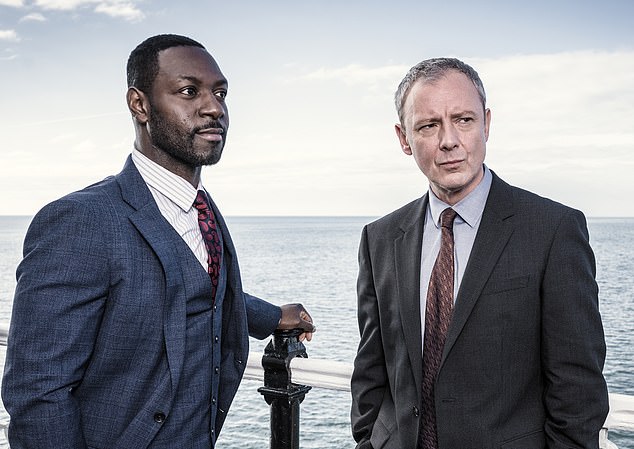 “Being here was pushing him over the edge,” chuckled the Super (John Simm). His devoted sidekick, DS Glen Branson (Richie Campbell) laughed until he almost dropped his bag of chips

Half a century ago, the knitwear, leather jackets and hairstyles sported by detectives Ken Hutchinson and Dave Starsky defined what it meant to be a man in the 1970s – when bubble perms were macho.

And while Starsky & Hutch roamed the streets or chatted with their informant Huggy Bear in his bar, our Brighton cop spends most of his day at his desk, answering the phone and checking files on his computer.

Although Grace is supposed to be a maverick, he can’t beat up drug dealers or dive into pools with movie starlets. His idea of ​​bending the rules is to seek advice from a psychic who lives in a nursing home.

If he gets caught by his boss, Deputy Police Chief Vosper (Rakie Ayola), she scolds him like a kindergarten teacher blaming a four-year-old for making a mess.

Voiceover for the weekend:

Revealing the antics of sun bears, orangutans and hornbills on Eden: Untamed Planet (BB C2), narrator Helena Bonham Carter seemed breathless and delighted, as if reading a bedtime story. Perfect with a cup of cocoa.

Compare the two eras, the 1970s and today, and you come to the inevitable conclusion that all fun has been squeezed out of the 21st century.

Cleaned up for ITV, Potting’s sulphurous jokes aren’t so much faded as slightly magnolia, just a shade less than innocent. When he calls breast implants “silicon norks” and “devil’s dumplings,” that’s enough to send his fellow officers into steam fits.

Craig Parkinson as potty-mouthed Potting is the best thing about this austere series. He stole the show with a scene backstage at a nightclub, where he revealed a startling knowledge of Dusty Springfield’s greatest hits.

Her interrogation of a drag performer in a sequined blue dress provided a rare moment of glamour.

There’s no glamor in Beck (BBC4), the Swedish subtitled crime thriller returning for an eighth season, but that’s hardly expected from Scandinavians.

Martin Beck (Peter Haber) is also confined to his office, although that’s to be expected. He is recovering from brain tumor surgery and his grandson is now old enough to be a copper intern.

No wonder Martin’s daughter, Inger (Rebecka Hemse), rented him an allotment. At his age, a row of radishes should be enough for excitement.

He is still harassed by his neighbor (Ingvar Hirdwall) who regales him with tales of shaggy dogs – this time, about drug-induced hallucinations in the Amazon.

The murder investigation was carefully plotted and somewhat mechanical, as Beck’s always is. More intriguing are the simmering office romances and the return of Norwegian actor Kristofer Hivju, as boisterous detective Steinar Hovland.

Steinar is the kind of cop who visits a prison just to bellow old enemies through the doors. It looks like he would have enjoyed the 1970s.