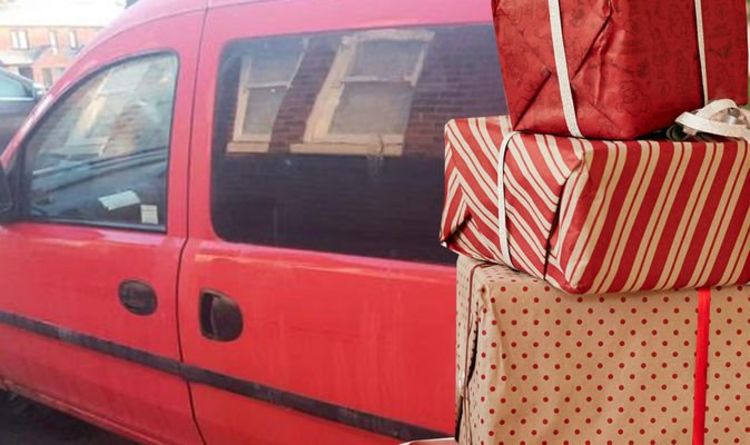 The nearly 100 Christmas packages were stolen from driver Juliette Henry, known to locals as the “lady in the red van”, as she delivered a package to Sutton Coldfield on Monday. She thinks the criminals planned the theft.

Mrs Henry, who has been delivering for Hermes for seven years, drove an old red Royal Mail van, a Vauxhall Combo which she had bought herself.

The theft, which she said was targeted, happened just before December 13 at Birch Croft Road.

Ms Henry, 54, said: ‘As I was delivering the second package to Birch Croft Road, I heard my van being central locked.

â€œI walked over to her quickly and saw the guys leave. I saw the van first, then I saw a white car driving behind.

“I was in shock. I looked for my keys and ran down the road to try to block them.”

The driver, from Erdington, continued: â€œThe white car was so quiet. I don’t know if it was an electric car.

â€œI never heard their door close. When I went to do the delivery, there was no one on the road.

“Then all of a sudden I heard the central locking with the five locks.”

While calling the thieves “an absolute disgrace”, she is glad they did not approach her.

She said: “Other drivers have been approached with knives.”

Claiming that her managers had been “brilliant,” she expressed fears of putting herself in danger by wearing her high-visibility HermÃ¨s, which she said could have made her stand out.

She said, â€œYou think you are doing whatever it takes to protect others, but did that identify me?

Since the theft, Ms. Henry has been using her Ford Ka to make deliveries. However, she now had to go home more often to pick up more packages.

She said: “My van was an old post office van. It was mine. It’s a distinctive van.

“All of my clients, they know me. I’m the ‘lady in the red van’ and they called me ‘the postman’.”

A West Midlands Police spokesperson said: ‘We were called after a delivery van was stolen at Birch Croft Road, Sutton Coldfield at around 1.30pm on Monday 13 December.

â€œThe driver said he left the keys near the van after making a delivery. These were later retrieved by a man who opened the locked vehicle and fled into it.

Anyone with information is asked to contact the police through their Live Chat or by calling 101 quoting 20/1871205/21.