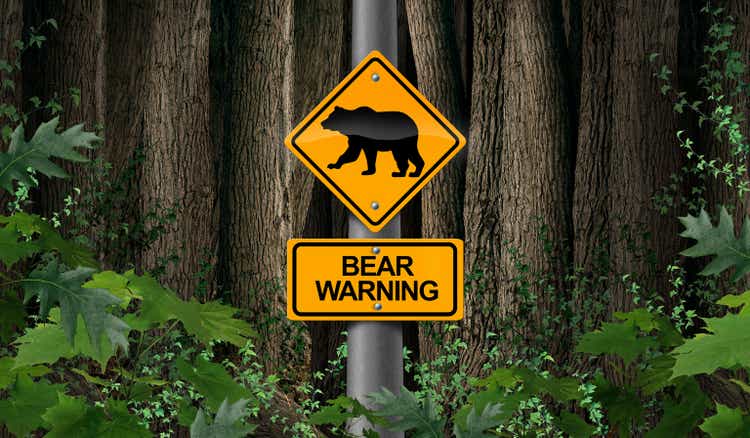 REITs, perhaps to a greater extent than other stocks, are traded as a group. There is relatively little granular analysis, with market price being most directly related to large-scale trading like ETFs.

June was a tough month for REITs with the index down 7.4% and, unsurprisingly, this coincided with massive outflows from REIT ETFs. The Vanguard Real Estate ETF (VNQ) alone saw outflows of nearly $1 billion

This is not granular analysis leading to broad ETFs, but rather broad notions of how macro events affect REITs. During the first part of 2022, REITs significantly outperformed the S&P on the general belief that REITs are good inflation hedges. The downward move is also dominated by broad lines and by studying the market as well as its participants, I believe there are 7 main bear notions that were behind the June selloff.

7 Most Common Beliefs About REIT Bears

Some of them are fundamentally true, some are downright false, and a few are more nuanced, partially true but should not be applied generally.

The office was prone to weakness due to chronic oversupply. Tech-enabled working from home was already gaining momentum before COVID, but the pandemic has kicked it into high gear. Office bulls argue that as the pandemic recedes from us, people will return to the office. That may be true, but given the pre-existing oversupply of office space, even a marginal work-from-home quota of 15% of workers would be enough to hurt office real estate.

The problem is more pronounced in areas that were already oversupplied and suffering from emigration such as New York and the West Coast. Some offices in key cities for job growth will still work well, but even that I would only buy at a bargain price.

This notion is derived from a combination of history and factual data. During this recent period of near-zero interest rates, real estate prices have skyrocketed. Industrial prices, housing prices and land values ​​have all gone up significantly, so I can see why this looks bubbly.

A bubble, however, does not mean high prices. Real estate prices have risen because the earning power of real estate has increased and capitalization rates have fallen. It was a rational price movement driven by reasonable economic activity.

A bubble is more speculative in nature. Compared to previous cycles, there has been relatively little speculation. People don’t buy with the expectation of reselling the property within a year at a profit. They buy real estate for use or for cash flow.

The other main characteristic of a bubble is its tendency to burst. If high house prices were the result of a zero interest rate bubble, they would have come back down when rates rose. This does not happen. While the yield on 10-year Treasuries rose about 200 basis points, house prices continued to rise, but at a slightly slower pace.

Real estate prices are well linked to the fundamental value.

REITs used to be heavily leveraged. The market’s perception of REITs as highly leveraged investments is simply outdated.

In contrast, the median REIT has a debt to EBITDA ratio of 6.17X

Over the past decade, REITs have shown great interest in strengthening their balance sheets, which has made the sector one of the most fiscally responsible.

Mortgage REITs are a different story with sometimes astronomical debt loads, but for the purposes of this article, we are discussing equity REITs.

Mechanically, there is no doubt that e-commerce and gas prices are hurting retail. Each competes with retail for consumers’ money. Gas prices got worse while e-commerce moderated a bit with 2022 with the first ever increase in brick and mortar market share against e-commerce.

So while the directionality of this notion is true, I think the market is overly concerned about the magnitude of its impact. Commercial real estate is actually in a good position right now, as supply has been extremely limited. There has been minimal mall development for 15 years, which has taken the US from oversupply to about right level of supply.

I expect shopping center REITs to experience significant fundamental growth over the next few years.

Although rising construction costs make REIT developments less accretive, this is unequivocally a benefit to REITs as a whole.

The economics math is quite simple. Less accretive development leads to less development, which improves the rental prospects of permanent inventory.

The REIT universe is overwhelmingly made up of permanent inventories, with development pipelines representing only a fraction of the overall valuation. The benefits of reduced supply in the future will outweigh slightly less accretive developments.

Supply is not a problem that can be dealt with with a wide brush. It is location and property type specific.

There are certainly subsectors that are in surplus, but there are also areas where there is a shortage of supply. These could be further broken down to be more nuanced by submarket, but broadly speaking:

The supply of real estate in general has been more subdued since the financial crisis due to tighter lending standards. For developers to get a loan now, the project must have reasonable underwriting which has significantly curbed speculative development.

It’s a topic I’ve discussed many times before, but it continues to be a major driver of market prices. As I write this, REITs are up nearly 2% on the day (July 1st) and it just so happens that the 10-year Treasury yield is down substantially to well below 3%.

The market in general has reacted to interest rates in that when rates are up the market is down and vice versa, but the effect has always been around 1.5 to 2 times for REITs. The fear of market interest rates is so strong that it has recently started interpreting bad news as good news.

Interest rates are largely down today on weak manufacturing data which, in turn, suggests the Fed may be closer to easing its hikes.

As discount rates increase, the magnitude of the impact on financial instruments should be proportional to their duration.

Cash is not affected by rising interest rates because it has a duration of 0.

The term of the bonds is a function of the weighted average of the interest payments and the lump sum payment at maturity. Stocks don’t have a lump sum payout, so it’s a matter of how short-term the average cash flow is.

Based on this factor, REITs should be slightly less interest rate sensitive.

In terms of cost of capital, we have established above that REITs have somewhat lower leverage than S&P in terms of Debt to EBITDA. Lower debt makes eventual refinancing of liabilities slightly less painful for REITs. Additionally, REITs have specifically defined their debt so that refinancing is not a short-term or even medium-term event.

I like to stay aware of the forces influencing price action and keep an eye on whether that price action is fundamentally justified. The practical implication is as follows:

By differentiating between what moves the market and what should move the market, one can spot trades as they arise.

Get a lifetime Microsoft Office license for Mac for $40 – the cheapest price ever!