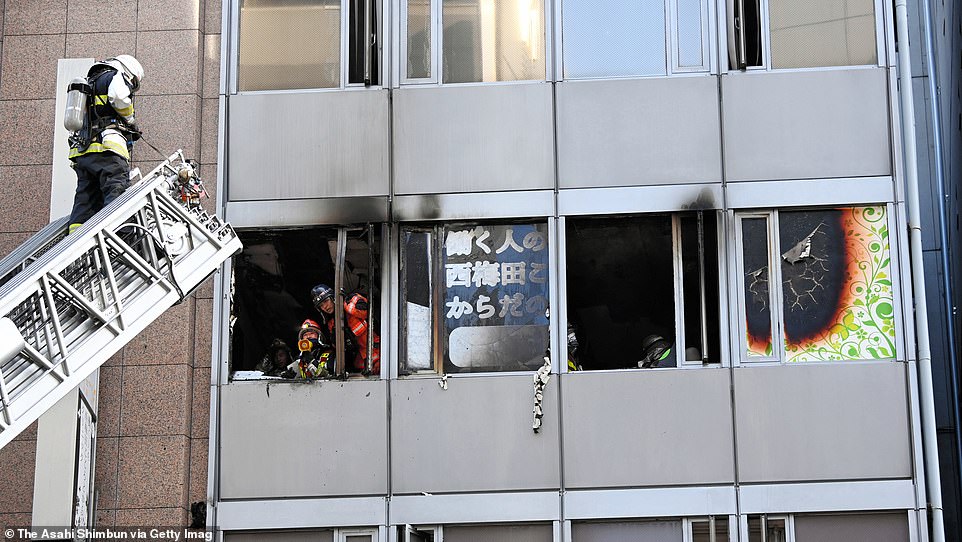 A fire that ravaged a Japanese mental health clinic has killed at least 24 people, with police now chasing a suspected arsonist who was seen with a paper bag dripping with unidentified liquid.

Fire crews who reached the building in the Kitashinchi shopping district in central Osaka found 27 people in cardiac arrest, while a woman was found conscious and taken to safety from a window in the sixth floor on a ladder.

Three others were resuscitated but remain in serious condition, while 24 have been pronounced dead.

Japanese media said a man in his 50s and 60s dispersed liquid near a stove to start the fire.

According to NHK, an outpatient at the clinic reception saw the man wanted by police.

Another person nearby said the fire started shortly after placing the leaking bag next to a stove on the floor and kicking it, with more liquid flowing out.

The charred interior of the clinic was visible through blackened and shattered window frames as firefighters put up tarps to hide the scene in the wake of the blaze that started mid-morning and raged for half an hour on the fourth floor of the narrow block.

The police have set up a team at the prefecture’s police headquarters, a sign that they strongly suspect arson and murder.

A doctor at one of the hospitals treating the victims said he believed many of them died after inhaling carbon monoxide because they had limited external injuries.

The building houses the mental and internal medicine clinic, an English school and other businesses.

Most of the victims were said to have been visitors to the clinic on the fourth floor, firefighters said.

Only one floor of the building appears to have been affected by the fire, which was extinguished by firefighters

A psychiatrist at the clinic, Kotaro Nishizawa, could not be reached after the fire, NHK said. He quoted his father as saying the doctor had hinted at a problem at the clinic but did not give details.

Residents on other floors of the building were said to have been safely evacuated, firefighters said.

NHK cited a witness as saying he heard a woman’s voice coming from the fourth floor calling for help.

â€œShe leaned (out of a window) and said things like ‘Please help her’â€¦ She looked very weak. Maybe she inhaled a lot of smoke, â€the woman said.

Another witness told TV Asahi that he saw flames and smoke coming out of the windows on the fourth floor when he came out after hearing a commotion.

A total of 70 fire trucks were mobilized to tackle the blaze, which was completely extinguished after more than six hours, officials said.

A total of 70 fire trucks were mobilized to fight the blaze, which was completely extinguished after more than six hours

â€œThe municipal fire department is investigating the cause of the fire. I received a report that Osaka Police are investigating the fire as a potential arson, â€Regional Governor Hirofumi Yoshimura said on Twitter.

Deadly fires are unusual in Japan, which has strict building standards, and violent crime is also rare.

Prime Minister Fumio Kishida offered his “sincere condolences” to the victims and his sympathy to those injured in the incident.

â€œWe have to get to the bottom of this horrible thing. We need to clarify the cause and how it happened. And we must take action to prevent the same from happening again, â€he said.

Most of the exterior of the eight-story structure remained intact after the fire, with approximately 215 square feet reportedly burnt in the blaze.

The building houses the mental and internal medicine clinic, an English school and other businesses

â€œThere was a lot of black smokeâ€¦ there was also a very strong smell,â€ a middle-aged woman told NHK at the scene.

Fuji TV reported that most of the people who died in the fire suffered from carbon monoxide poisoning.

A year ago, a man was charged with arson murder in 2019 against a Kyoto animation studio that killed 36 people, the country’s deadliest violent crime in decades.

The attack sent shockwaves through the anime industry and its fans in Japan and around the world.

An arson attack in 2008 against a video store in Osaka left 16 people dead. The perpetrator is now on death row.

Busiest week of current year at USPS facilities across the country